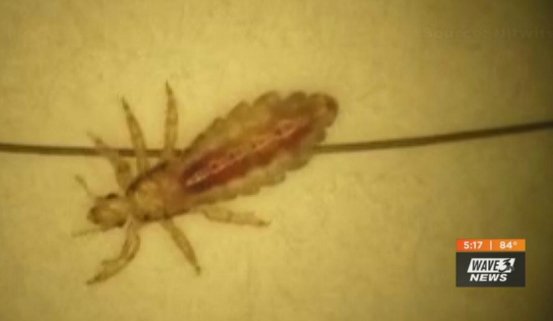 LOUISVILLE, KY—The treatment-resistant form of lice scientists are calling ‘super lice’ has been found in 25 states including Kentucky and Indiana.

Spokespersons for Oldham and Shelby county schools have confirmed to WAVE 3 News that standard lice has already been spotted in schools this academic year.

School systems in our area tell us they are aware of super lice, but have not confirmed any cases.

Scientists said this strain of lice has developed resistance to over-the-counter treatments.

Amy Sharp of Nitwits said she has treated dozens of students already for the harder-to-kill form of lice and has a new treatment that is 99% effective in killing the bug.

Lesley Harris brought her six-year-old to Nitwits with a case of super lice last school year.

Harris said it was a nightmare for the entire family.

“I went to the pediatrician, got the prescription drugs and I just could not get her nit free,” she said.

Harris’ daughter was forced to miss four days of school, until she was treated by Nitwits.

“We call it the ‘one and done’ treatment,” said Sharp, “You’re here for an hour and you leave lice-free.”

First, the technician uses a device — similar to a hair dryer — that blows hot air on the scalp to kill the lice — even super lice.

Sharp said the treatment takes about an hour and dehydrates both the bugs and eggs.

After the lice are dehydrated, the hair is shampooed and combed through to remove dead particles and eggs (nits).

“We want to have their hair completely cleaned out so they can go back to school,” Sharp said.

As schools across the country brace for super lice, it’s important to know kids aren’t the only ones catching it.

Sharp said thanks to the popularity of the selfie — or ‘usie’ — when you put your head against someone else’s to snap a picture, you could be catching lice too.

She’s treated several teens and even adults for lice in recent months.

The average cost of the complete treatment at Nitwits costs about $150.

How lice is handled in schools differs by district.

A JCPS Exposure to Head Lice and/or Nits Notice must be sent home notifying classmates’parents that a case of head lice is suspected and asking them to check all of their children for head lice. If only nits have been identified, the parents will only receive the exposure notice. If lice were identified, the parent/guardian is contacted to pick up the child from school so treatment can begin immediately. If the parent/guardian cannot be reached or is unable to come to the school, the student can remain in class for the remainder of the day and go home on the usual method of transportation. Treatment must occur, however, before the student can return to school.

“Our policy is that, once detected, a student may not attend school as long as any nits or live lice are present,” said Tracy Green, spokeswoman for Oldham County Schools. “We check all students in their class/on their bus and provide a notice to those families. Siblings are also checked, as well as siblings’ classrooms/buses.”

Policies obtained from Shelby County County Public Schools states parents of students who are confirmed to have live lice will be contacted by the school. Playmates and siblings of the student confirmed to have lice may also checked for the bug and their parents could also be contacted. Students are not sent home from school because of nits.

“Students with live lice are sent home.  Letters are sent home, however with the upper grades the situation is evaluated and may be  handled differently,” said spokeswoman Lesa Bodine.

Policies obtained from Hardin County Schools states parents of students who are confirmed to have live lice will be contacted by the school. Playmates and siblings of the student confirmed to have lice may also checked for the bug and their parents could also be contacted. Students are not sent home from school because of nits.

Do you know what you are putting on your child’s head?